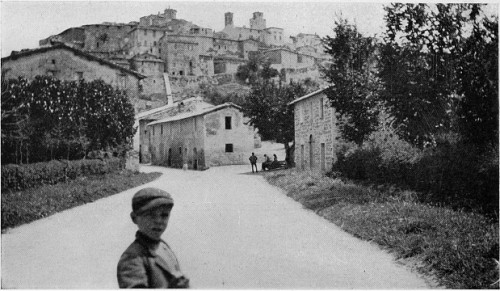 Deruta is a little unvisited hill-top town, Romeward, a short distance from Perugia. Few travelers have bothered themselves with even the briefest description of this throughly interesting old-time town, cradle, perhaps, of the fabrication of the maiolica ware, that products throughout the centuries which has added to the period of Italian pottery. Perhaps we ourselves might not have come upon this delightfully quaint spot had not, dear reader, rush to the conclusion that eithe Cosimo or Lorenzo, his grandson, inspired our trip. The Medici to whom I refer was a certain cheerful individual who claimed London as his birthplace, the Albert and Victorian Museum as his alma mater and all things Italian as his passion. I have never known anyone so throughly a collector by instinct and by indulgence as was the Medici. So we called him, not because of his love for old things alone, but because, as the third of out trio, nicknamed Fra Benozzo, declared, he of all other human beings was the only one to be found the world over who really and contemorary things artistic. Others encouraged painting, some were generous enough to make it possible for sculptors to exist, but of them all the Medici alone emptied his purse and filled his storehouses with examples of all the beautiful things of the present wrought with artistry and with sincerity which he could discover. 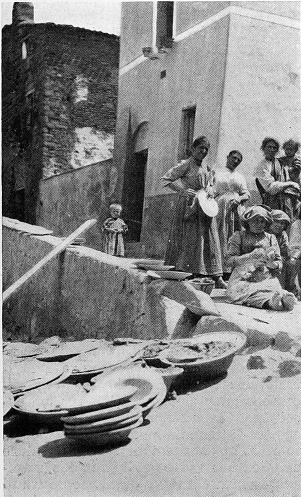 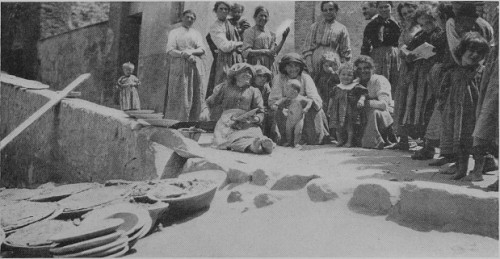 When I say filled his storehouses, I assume he had such; we never knew. But we did know he bought right and left, and always he right things. “What a museum I am leaving to tomorrow!”he would sometimes declare, to which Fra Benozzo (whose very lovely and remarkable etchings wee eagerly acquired by the Medici, at dealers prices, plate by plate, as they appeared!) would reply “Go on!”. Now it happened that on one of the days of our sojourn in Perugia, the Medici rushed into the albergo where we were modestly domiciled and breathlessy announced his latest acquisition, a lovely bacile of maiolica ware, “made yesterday, men, in Deruta, and it is as fine as anything!”It was very beautiful – St.Francis’ Sermon to the Birds the subject of its decoration. “Do you realize”, said Medici, “What this plate indicates?” We did! And we were right! It indicated hunting up Deruta, and that meant making sure Cerrio would be on hand at seven in the morning with his astoning carozza and the equally astonishing horse that raced us all down Perugia’s steep hill-street, on into the plain below and along the road which threaded tiny hamlets, till at last this jade flew up an ancient overbuilt hill with us, not pausing until the gate of the town was reached. This Emillkina was the most extraordinary horse I ever knew. She would discredit any theory of gravitation science has devised. But whatever perils we had escaped, – she took high leaps over pigs, chickens and children completely, – how thrilled we may have been with Cerrio’s superb and endless flow of invective speed encouragement, all these things were forgotten in feeling that we were on the threshold of discovery, the finding of a place which systematic old Herr Baedeker had not considered worth his while; a town which produced some of the most beautiful maiolica ware in the world, maiolica which may have been the first from native italian craftsmen. Just outside the entrance to the town we alighted, preferring to make our entrance less like that of the occupants of a circus chariot on the home stretch. The Medici had not gone ten paces before he stopped us, crying“Look! See that old subyl there!”Michelanglesque in design, an old woman sat on the pavement in front of an ancient building. To te right of her and to the left of her stretched a sea of plates, while in front of her were great basins full of potter’s clay. 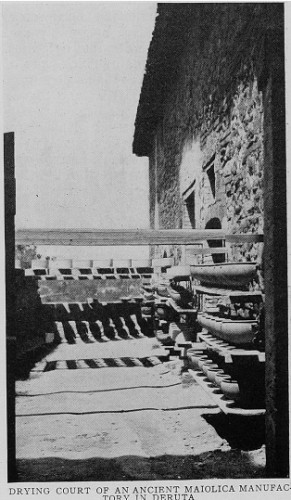 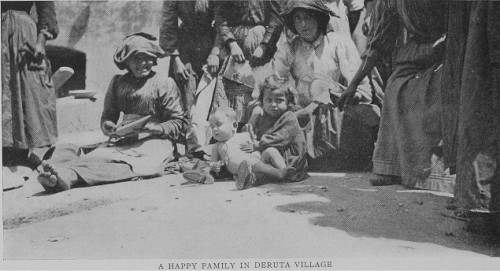 In her hands she held a basin-like plate, or bacile, which she was giving final receiving surfaces to in primitive way. “Behold”, said the Medici, “the queen-mother of maiolica!” Noting our interest in her occupation, the aged signora smiled hospitably and came forward to answer our enquiries. Certainly she knew yhe maiolica ware of Deruta was very ancient! Was there not, for instance, an old dish in the Signor Sindaco’s house which had been made for the wife of Julius Caesar? Had there not been an old dapothecary’s pot of Deruta ware rescued from Messer Noah’s ark? If we would but care to follow her she would see with our very own eyes the actual Deruta ware bowl in which Messer Virgilio mixed enchantment brews! “This is not a sibyl, Medici”, I whispered, “Just plain Signora Ananias!” The Medici turned pityng eyes on me and said with finality, “You have no imagination!” The Director laughed when we related the scraps of information the sibyl had imparted to us on our way through the medieval street that led to his medieval office. “But do you wonder?” said he.

“The beginnings of the making of our faience is wrapped in mistery. Connoisseurs quarrel about it, and collectors can but content themselves with knowing of its later period. The mother-of-pearl lustre, which is so remarkable in the early pieces, and which, to some extent, our modern pieces have succeded in imitating, has been claimed for Deruta by some, and for Pesaro by others”. We found the Medici encyclopedic on the subject, much to the delight of the Director, and between them both we came to learn much of the history of the ware, although unenlightened as to its origin. The mother-of-pearl lustre, madreperla, was derived from a golden pigment of peculiarly pearly effect in certain lights and as fragmnents of just such ware have been found in the centuries-old-debris heaps near the old-time potteries of Deruta, it seems likely that Deruta was the cradle of the Italian madreperla ware. 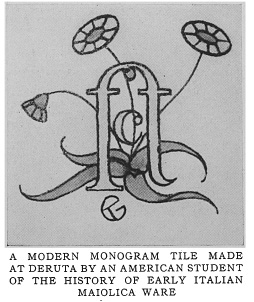 Did old Moorish potters come thither from Spain to teach the early Italian craftsmen of this little town? One can only guess that they did. Compared to the maiolica of Gubbio, the old faience of Deruta seems to have the distinguishing characteristics of being coarser in grounding, design outlines more loosely drawn and of a somewhat colder blue, the golden reflet more brassy in character. Then the deep blues in the old unlustred Deruta maiolica appear not so brilliant as those of the Caffaggioloware. I do not doubt but that Deruta communicated her faience secrets to Gubbio (a day’s journey distant) at an early period. The earliest dated piece of Deruta maiolica is a votive plaque in the Castellani collection. The date it bears is 1505 and it is inscribed AVENDO. IO. LOBE. DOL. AMALATE. IN. CHASA. MERECOMMANDAE. AQUISTA. GLORIOSA. VER. MARIA. EF. SAO. The Salting collection contains a Deruta plate dated 1545, certain pieces dated between 1541 and 1545 bear the inscription of EL FRATE; but who this frate was we have yet to know. In the Sacristy of the Church of S.Pietro at Perugia we later saw a pavement of Deruta tiles which was dated 1563. However, the maiolica industry existed in Deruta a couple of centuries before the Sixteenthy. Documentary evidence shows that as early as the eighth decade of the Fourteenth century – 1387 to be exact – potteries for making maiolica were established in Deruta. Another early document shows that the use of tin in the fabrication of the faience dates back to 1475. I do not think these things would ever have dimmed the sibyl’s faith in the stories she told! Later, when we stopped to talk to her again after inspecting the interesting old buildings where the very beautiful and fully worth collecting modern ware was being produced (in the same manner, with the same sort of clay glazes, decoration pigments, molds, etc., that had been in use for centuries), our sibyl had more stories to tell us, stories which wedded the legends of antiquiy to the happenings of but yesterday, and how glibly she did it! Had we ever heard of the Baglioni of Perugia? We certainly had! Well he once built a whole house of Deruta maiolica tiles and invited the poet Dante and the composer Verdi to visit him there! “Upon my word!” exclaimed the Medici, “What is an imagination Signor?” With a pleasantnudge at the Medici, I ventured “An imagination, signora, is a valuable adjunct much sought by collectors to unhance the charm of their acquisitions.” The sibyl only shook her head, but the Medici understood.

Description: Through collaboration with the Metropolitan Museum of Art, the Frick Collection, and the Brooklyn Museum, JSTOR has developed a collection of 19th and early 20th century American art journals found in the libraries of these prominent New York City museums. These fragile periodicals are a rich source of images and text, which span the development of American visual culture and the evolving role of the artist and art audience within it.
Coverage: 1919-1920 (Vol. 10, No. 6 – Vol. 11, No. 9)
Publication of this title ceased in 1920.
ISSN: 21505969
Subjects: Art & Art History, Arts