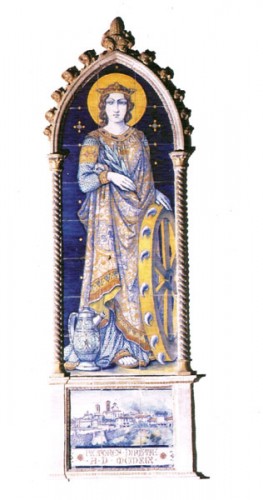 The Legend ‘Aurea’, text written in the Thirteenth Century by Jacopo da Varazze, tells about saintsin and about Caterina d’Alessandria too. The legend tells about a young and beautiful Egyptian girl of noble birth. At the time, the eastern provinces of the Roman Empire have been governed by the governor Massimino Daia. In 305 A.D. he was appointed governor of Egypt and Syria and so he arrived in Alexandria in Egypt to celebrate this office. Celebrations included animal sacrifice in honor of Pagan Gods. During these celebrations the girl showed up in front of the governor to complain against the cruel practices and inviting everyone to convert to Christianity. Massimino, the governor, sounded very moved by the girl’s bravery and beauty. So he called his literates and rhetors to convince her to change her mind. Caterina wins the philosophical fight and she convinced the men to convert.

Massimino, furious, killed the intellectuals and then he tried to convince Caterina to marry him. She refuses with disdain and so the governor sentenced to martyr. The instrument of torture was the cogwheel. But, as soon as, the girl touched the instrument, it miraculously broken down. At that point Massimino decided to kill her by beheading. It was the 25th november 305 A.D. In the traditional iconography Santa Caterina is represented in royal robes and the crown on her head to underline her noble birth. On one hand she holds the palm of martyrdom, on the other hand she holds a book, symbol of culture. Other symbols with whom she is represented are the sword, the weapon that killed her, and the cogwheel, the instrument of martyrdom that miraculously broken down. This element links the saint with a lot of categories of arts and crafts having to do with the ‘wheel’, for this raison she can be considered patron saint of Ceramist too. In fact this saint is venerated in Umbria, especially in Deruta, one of the most important town for ceramic, where every year, on 25th november, is celebrated Santa Caterina’s feast day.