The tiny church of La Madonna del Bagno, just outside Deruta, is a country sanctuary built around XVII Century just after a miraculous event of 1657. According to the legend, in the mid 1600s, a Franciscan friar found a broken fragment of crockery on the ground, the base of which was painted with an image of the Madonna and infant Jesus. To avoid it being trodden on by passersby, he wedged it between the branches of a small oak tree along the path. Later, a merchant from Casalina noticed the fragment had fallen again, so nailed it back to the tree.This merchant, Cristoforo di Filippo, returned to the tree just a few years later to commend his wife, desperately ill, to the Virgin Mary and ask for her grace. The miracle occurred, in fact, the merchant, just come home, found the wife cleaning house, in perfect health. From this fact started the cult of the little imagine of Virgin Mary. The couple then commissioned the first votive plaque to give thanks to Maria for her intervention, a tile now almost 400 years old that can still be seen behind the altar of the church. This glass case behind the main altar holds the first votive tile from 1657, together with the famous oak tree. Just months later the first stone was laid to build the church around the site where the oak grew. Once the church was completed, local citizens began commissioning their own tiles to give thanks to the Virgin for her various interventions. Over the succeeding 4 centuries, these tiles gradually began covering the walls and corridors of the sanctuary. 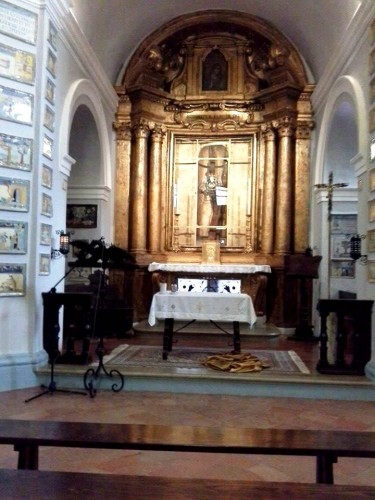 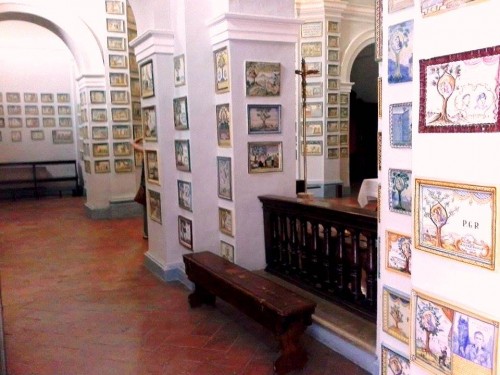 600 majolica votive tiles adorn the walls of the church.

What makes La Madonna del Bagno special is on the inside: more than 600 majolica votive tiles adorn the walls of the church, made by Deruta ceramists on commission of the faithful who received grace. Each one inscribed with the letters PGR (‘Per Grazia Ricevuta’, for grace received) and a scene depicting various misfortunes and illnesses that have been resolved due to Virgin Mary’s intervention. The base of the cupola is ringed with tiles too.

From a historical point of view, it is interesting to see the progression as the scenes move from medieval misfortunes like demonic possession, highway robbery, and females bedridden for undisclosed maladies and rural accidents that involve horses, agricultural tools, and falls from trees to sons returning from war and open-heart surgery and industrialized accidents involving cars and trains.

In 1980 some thieves broke into the church, at the time unguarded, and stole over 200 tiles—including the original tile from Cristoforo di Filippo. Dozens left abandoned on the floor after being broken by clumsy hands trying to chip them out of the walls. Many were later recovered, others were replicated with the agreement of Soprintendenza. 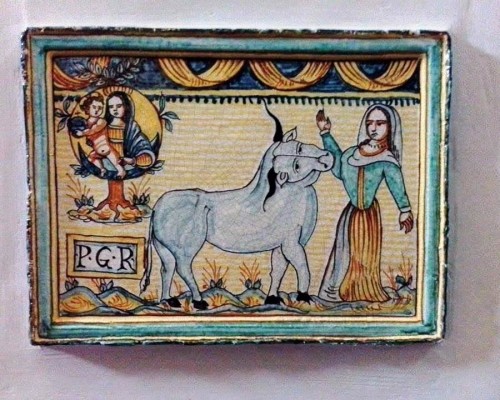 Woman trampled by a bull

In 1980 some thieves broke into the church, at the time unguarded, and stole over 200 tiles—including the original tile from Cristoforo di Filippo. Dozens left abandoned on the floor after being broken by clumsy hands trying to chip them out of the walls. Many were later recoved, others were replicated with the agreement of Soprintendenza.

3d view inside of the Church